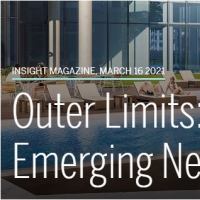 Sotheby’s International Realty Brokers reveal which neighbourhoods are emerging as the next housing hot spots.

Surburban neighbourhoods in the past have not been for everyone, especially those seeking to be at the centre of city life. Usually, it is in major cities where bustling new restaurants and trendy art galleries emerging in otherwise overlooked historic areas signalled when buyers and developers should get excited about fresh opportunities. But Covid-19 has brought a whole different set of homeowners’ priorities into sharp relief — time with family, room to roam and a lifestyle with a sense of community. “People want to love of Sales at Sotheby’s International Realty Canada. “People have been looking for move-in-ready homes and saying, ‘I need a home in the mountains and I need it now.’ ” Canmore has long been overlooked for its more renowned neighbour, Banff, but is coming into its own. Neighbourhoods like Rundle View, which abuts the Canmore Nordic Centre originally built for the 1988 Winter Olympics, have mature trees, winding walking paths and stunning views, all just a 15-minute stroll from the city core and a short drive to Banff’s ski resorts, shopping where they live,” says Justin O’Connor of the Okanagan’s Justin O’Connor Group, who’s a Sotheby’s International Realty Canada Broker.

In today’s market, buyers are turning to regions that offer access to nature and amenities, dedicated spaces for remote work, and move-in-ready houses to call home. On the west coast, that includes the Okanagan in B.C. and Canmore in Alberta, both areas that have seen a boom over the past year. “Canmore has had an exceptionally good year for real estate,” notes Christopher Vincent, Senior Vice-President of Sales at Sotheby’s International Realty Canada. “People have been looking for move-in-ready homes and saying, ‘I need a home in the mountains and I need it now.’ ” Canmore has long been overlooked for its more renowned neighbour, Banff, but is coming into its own. Neighbourhoods like Rundle View, which abuts the Canmore Nordic Centre originally built for the 1988 Winter Olympics, have mature trees, winding walking paths and stunning views, all just a 15-minute stroll from the city core and a short drive to Banff’s ski resorts, shopping. and nightlife. “Buyers who are looking for that privacy but still want access to downtown are taking the older homes there and giving them major facelifts,” Vincent says. “People are look-ing for that community lifestyle.”

In the Mont-Tremblant region, move-in-ready means properties designed for owners to with-stand and — dare we say it — enjoy the minus-30 to plus-30 temperatures the area endures year-round. “Yin-yang is what’s interesting right now — indoor living space equal to outdoor living space,” says Herb Ratsch, a Sotheby’s International Realty Broker in Mont-Tremblant. “The flow from indoor to outdoor is really important. It’s not [about] a little deck with a barbecue anymore. It’s an outdoor kitchen, living and dining spaces. Add heat lamps and that gives you April, May, October and November.”

Fleeing city homes for country ones has become a mental-health must, according to Ratsch. “People are asking, ‘How do I turn my house into a retreat?’ You’re seeing them put gyms, spas, workspaces within their homes. ”In Mont-Tremblant, an extra 10 minutes in the car — driving north to Labelle, La Macaza and on to Nominingue — will net you exceptional rewards. The landscape unfurls to reveal dozens of sapphiric lakes just off the highway, offering affordable waterfront properties on the beaches of Lac Lacoste, Lac Labelle and many others in what has become a year-round playground. “We’re waterskiing and surfing from June through September. If skiing is more your style, follow the lifts,” says Ratsch. In 2022 the mountain plans to open a new lift at the base of Versant Soleil, which means even more ski-in ski-out possibilities. “The ski hill is like the beach,” he explains. “You want to be right on the beach. You want to be able to click, click and hand your skis to the valet.”

But regardless of whether you want to raft down the river or earn your turns, Ratsch believes that what’s critical now is a rock-solid Internet connection that rivals that at the office, so families can work and play in the same space. Miranda Pearson, a Sotheby’s International Realty Canada Broker in Kelowna, points out that dedicated workspaces come in many forms. One Water Street — a luxury condominium in Kelowna’s developing downtown — not only has a dedicated business centre in the tower, but an entire floor that offers resort-like amenities such as a pickleball court, two outdoor swimming pools, a pet friendly park, a health club and guest suites. “For those of us that might still work from home, it might mean a coffeehouse or a patio or a backyard. Here you can take your office outdoors — even on the lake!” (Yes, Pearson confirms, you can still snag a Wi-Fi signal on Kelowna’s Okanagan Lake, situated mere steps from the building’s front door.)

More and more, buyers want options —the privacy of quieter communities with the proximity of everything city life offers. Driving along the Niagara River showcases Ontario’s best, from vineyards and wineries to fruit stands spilling over with peaches, apples and plums. Tucked away in the rolling hills behind historic Queenston is St. Davids, a Niagara-on-the-Lake community that’s home to just 2,000people and mere minutes from the landmarks of NOTL’s old town and Niagara Falls’ much new-er one. “People are buying to live here,” reportsDoug Widdicombe, a Sotheby’s International Realty Canada Broker born and raised in the region. “They want space. They’re tired of being cramped in condos and tight neighbourhoods.” St. Davids boasts modern architecture, family homes and a slate of activities long enough to keep even the most energetic outdoors people happy with the Bruce Trail running right through the community and the cycling paths and golf courses surrounding it. Toronto is an hour and 15 minutes away and, when the world opens up again, the Buffalo airport is just 45minutes from your own personal slice of heaven. “The tallest building in Niagara-on-the-Lake is three storeys,” Widdicombe notes, “so you always see the sunset.”